The following is a copy of brochure titled, “Watch me grow!” provided by Little One Publishing, LLC (copyright 2004 L. Brenegan). It’s a quick simple glimpse into the first nine months of a baby’s life and how they develop! 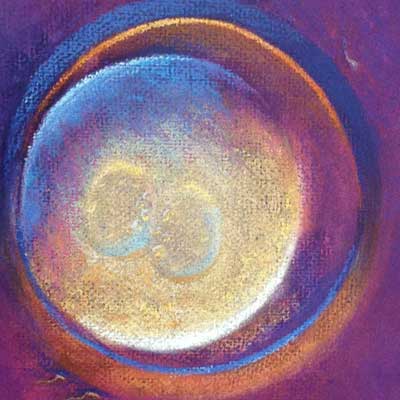 “I’m here!”
At the moment the nuclei of the father’s sperm and mother’s egg unite a new and unrepeatable human being comes into the world, complete with his or her own unique set of DNA. The new little person’s sex is also determined from the beginning. This tiny human begins her life as a single cell gliding down the fallopian tube. In just a few days she will snuggle into the soft lining of her mother’s womb where she will be nurtured for about nine months. After birth she will play a unique role within her own family and community – a role only she can fulfill. All she needs is time, nourishment and, most of all, love. 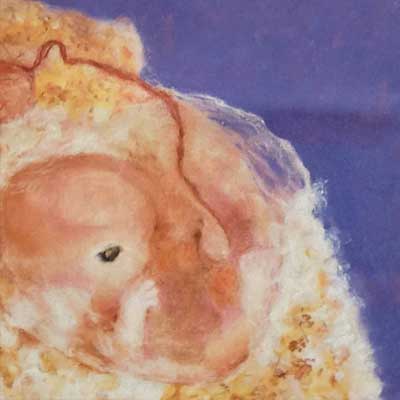 “My heart started beating today!”
During this first amazing month of life, the baby grows to 10,000 times his size at conception. He is totally dependent upon his mother. Between mother and child lies the vital organ called the placenta. Here vessels from mother and baby intertwine without joining, highlighting this newly formed relationship – mutual, nourishing and deeply connected. By the third week the baby’s tiny heart begins to beat. 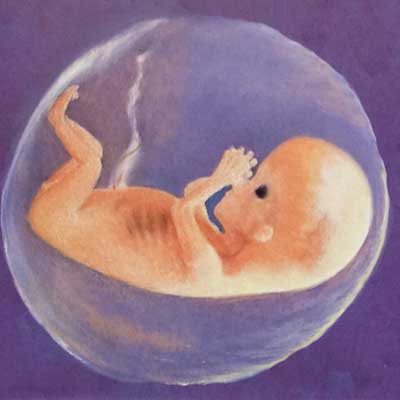 “I’m dancing!”
The baby is making rapid progress developing all her external and internal organs. During this month baby teeth form and her fingers and toes are developing. Her ears, nose, lips and tongue can now be clearly seen. The skeleton changes from cartilage to bone and brain waves can be recorded. The central nervous system is now functioning, and so 40 muscle sets begin their first exercises. By 8 weeks, all body systems are present and now the baby is called a “fetus” a Latin word meaning “little one”. Ultrasound reveals that this little one can now spring and jump – her first dance steps! 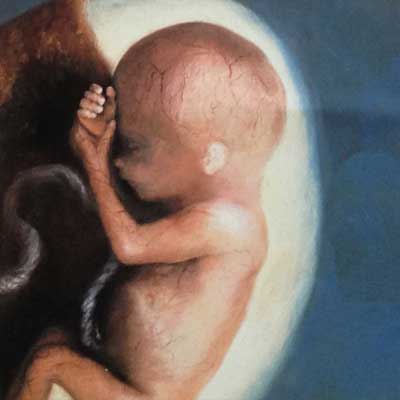 “I can suck my thumb now!”
The baby now sleeps and awakens. Fingernails and toenails form and he already has his own unique set of fingerprints. Sensitive to touch, he will tightly grasp an object placed in the palm of his hand. He breathes amniotic fluid to help develop and strengthen the respiratory system, but he gets the oxygen he needs through the umbilical cord. He can also squint, swallow and move his tongue. In fact, early this month – at week 9 – he began to suck his thumb. 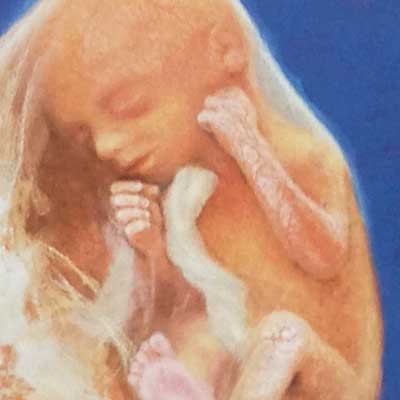 “I had a dream!”
The baby’s brain has begun maturing – a process that will continue until she is about 14 years old. Her taste buds are now working. Nutrients consumed by her mother are passed on to her within an hour or two. Three hundred quarts of fluid a day are sent to the baby via the umbilical cord. Fine hair begins to grow on head, eyebrows and eyelashes. Facial expressions similar to the baby’s parents can be seen at this time. This month REMs (rapid eye movements) have been recorded – a sign of dreaming. 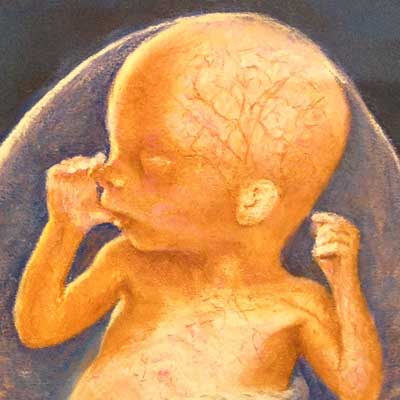 “Mommy felt me kick!”
This month marks the half-way point to birth, and the baby is very active. Sleep habits develop and his mother can feel him move and stretch, particularly when she is resting. He is big and strong enough to kick hard against the outside uterine wall and dent it. Up to now, although he swam with ease in his watery world, he was too small for her to detect because the inside wall of the uterus has little feeling. Babies born at this age have survived. 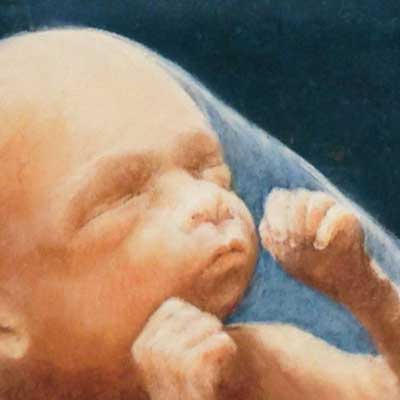 “I’m sitting up straight now!”
The baby’s oil and sweat glands are functioning; these help regulate body temperature. A white filmy layer covers the body and protects her delicate skin from the surrounding amniotic fluid and from scratches as she twists and turns. This waxy substance will be quickly absorbed into her skin soon after she is born. She can now respond to sound. Her lungs are fairly well developed and she would stand a good chance of survival if born at this time. 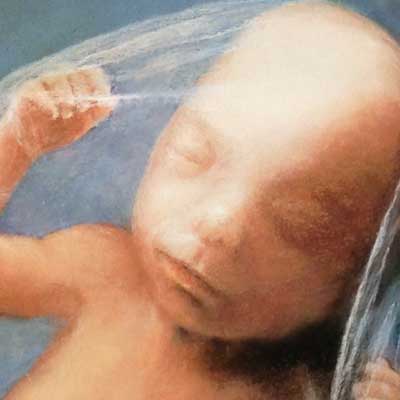 “I can look around!”
Beginning this month the baby uses all four senses. His eyelids open and close and the eyes look around. The baby can hear, taste, touch, cough, yawn and hiccup. He now recognizes his own mother’s voice. His grip is even stronger now than it will be after his birth. The hair on his head is growing longer and the downy covering the rest of his body is disappearing. During this time the baby will receive antibodies from his mother providing him immunity to a wide variety of diseases. 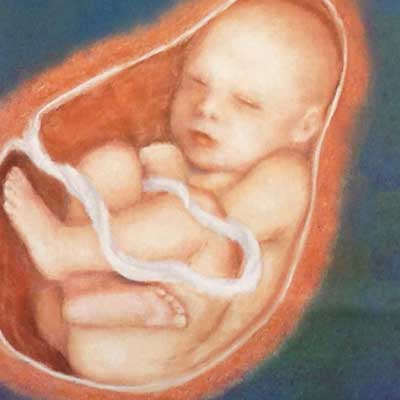 “I like to listen to my Mommy’s voice!”
In the last two months the baby continues to gain weight. She is developing a layer of fat that will keep her warm after she is born. In the ninth month she will shift to a head-down position, preparing for birth. Her lungs are now fully developed and capable of making the transition to breathing air. After birth she will continue the human growth process for many years to come. 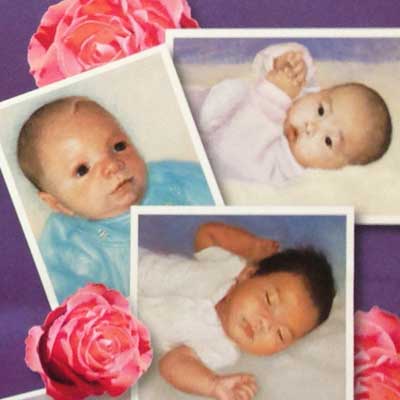